The image below of Francis Bacon's Biliteral Key is from page 79 of John Falconer's 1692 book:
"Rules for Explaining and Decyphering All Manner of Secret Writing" 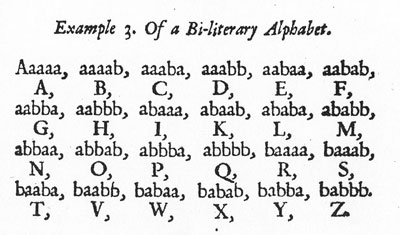 Study the following example from Shakespeare's Sonnets
carefully and decide if it may be an example of
Francis Bacon's "Biliteral" Cipher?

Do these letters contain meaning?

I have studied these letters in great depth and have some
definite ideas on what I believe they are telling us.
My interpretations partly relate these numbers
to the Pyramid that I describe on a separate page.

I will be glad to share my ideas,
but thought maybe it would be best to allow others
to see the letters first without any influence by my own vision.

I sincerely hope that serious cryptologists will take the time
to study this example. There are several more that I have found,
but since this is the one that begins the first 11 Sonnets,
I believe it is one of the most important.

As far as this being a "repeatable" example of a "possible" Biliteral Cipher,
it is solid as a rock. If it is truly a Cipher, we will have to find out.
I have noticed for quite some time that the letters "W" and "T",
and also "A" and "B", seem to begin many more lines
in Shakespeare's Works than pure chance would give us.